Anxiety Comes to an End

After anxiety and help shopping, I found what I think will be the perfect tow vehicle for my new fifth wheel, a Grand Designs Reflection. I take delivery next month, February 10th. Nothing like calling it close! Only twenty days away.

Last Saturday I got up early and left my home on an adventure. One that will be the beginning of many more to come. After shaking the dust off my brain. I fetched my luggage. A taxi was waiting to deliver me to the John Wayne airport here in Orange County.  It was the start of a very long day.

My flight left on time and after a layover in San Francisco, I reached my destination of Eugene, Oregon before 12:30 PM. There I was met by someone my son and I had until then only communicated with by email, and finally by telephone. His name was Ron Adams, who was our Salesman at Cottage Grove Chrysler and Jeep, south of Eugene.

From the airport, Ron drove south from Eugene for thirty minutes or so chatting about the truck I had picked out and getting to know each other. Ron was a very likable guy and had given me the best deal my son or I could find anywhere on the internet for a new 2013 Dodge Ram 2500 Crew Cab, 4×4, Diesel. After reviewing our deal and submitting the package to the finance manager, I signed the contract and was off on my inaugural road trip back south.  Pretty painless as far as buying a vehicle and took a little over an hour, mostly visiting.

After leaving the dealership and driving for about thirty minutes, it struck me that I hadn’t taken the pictures of the new truck at the dealer.  I told myself I was NOT going to forget to do that!  I did 😦 I was too far away by then, so I kept on going until I found a place to at least take a picture.

It turned out to be at a rest stop on the trip south to Medford, Oregon where I would be spending the first night.  The day couldn’t have been any nicer.  It was great weather for cruising and I love to drive.

Okay, rest break is over and on with the trip south.  I stopped at Applebee’s in Roseburg for dinner where I had my first experience finding a parking spot or should I say three.  Okay not perfect yet.  This guy is a lot bigger than my Silverado.  Thank goodness for the backup camera.  After dinner I continued on to Medford, arriving there around 7:30 PM.  It was a very long day, but I was pleased with my purchase and by the end of the first day, had bonded with my new ride.

I woke up early Sunday morning to freezing fog and ice so I decided to relax, have breakfast and wait for the thaw.  By 10 AM I was ready to leave on my second day of driving from Medford to Los Banos via Interstate 5.  I turned the key and waited patiently like I was told and read, especially since the temperature had dropped into the twenties overnight.  Then what sounded like a dog and cat fighting in an aluminum trash can began to come out from under my hood.  Fortunately, thanks to my Brother-in-law and Sister I was expecting an engine running that was not happy due to the freezing temperatures.

After many minutes things improved enough to move a little further down the road and it was running smooth.  Today will be the longest leg of the trip.  My destination is Los Banos, California, where I will spend the night.

Today had developed into another beautiful day to be on the road. I was lovin’ it. My first stop was a rest stop where nothing eventful happened. Stretched a little and back on the road.  An hour or so later, I turned off the highway for a quick stop to buy some bottled water in the city of Shasta.  A very small town near Shasta Lake.

I stopped at a Rite Aid, made my purchase, but while getting ready to climb back aboard a young man approached me.  “Sir, would you mind helping me start my car?”  He had a Toyota SUV that was having battery problems.  He and his wife were moving to Seattle and stuck.  I said sure and began moving my workhorse into position, after telling him I didn’t know which side the battery was on – well BOTH.  It was set up like my old Suburban with two battery’s – awesome (until it’s time to replace them).

After his car started, and we had an exchange of pleasantries, I was back on the road with my water.  During the entire trip, my most disappointing experience was to see how low Shasta Lake had been drained.  As I drove across the bridge it amazed me just how low it was.  We are talking over a hundred feet.  I know it was designed for use and not a natural lake, but just sad.  I prayed for rain during the next few miles as I continued my drive south to Los Banos. 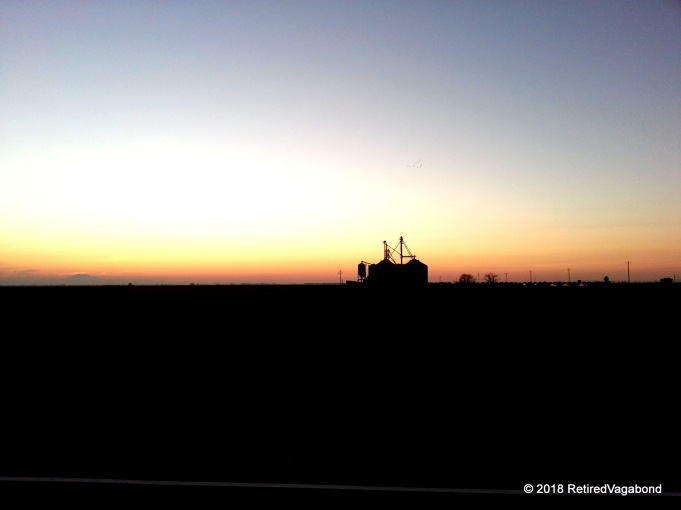 Throughout the day I made several additional stops to eat and take a stretch break. It’s so freeing not having to be anywhere on a time schedule, just meandering down the road through Central California and enjoying the experience.

I stopped off the road at sunset to catch this peaceful scene of a ranch. Then back on the road arriving in Los Banos around 7 PM.  It was a long day, but an enjoyable drive.  The only other disappointment, besides Shasta Lake, was not being able to take side trips to see some of the beautiful landmarks as I passed.  I was comforted by the thought that I would be able to return here soon to do just that.

It looks like I have been rambling on not paying attention to the clock.  I will finish up my trip South to OC on my next post.