Reflections – Slowing Down At Lake Utah

Heber city is pretty quiet on Sunday’s – maybe every day

Deer Creek is huge lake and would be a nice destination in its self. Passed on the way to Park City

Saturday and Sunday were days of rest and relaxation.  We took a drive to Park City on Sunday.  It was a beautiful drive that unfortunately I have very few physical pictures due to unsafe places to pull off the highway.

On every side of the stretching highway, there were steep green mountains with melting snow.  Resting below were farms with beautiful meadows already busy growing crops of this and that, or raising cattle and sheep.

On our arrival at Park City, apparently a Ski mecca, I drove down the main drag which was teaming with people enjoying the sunny cool day.  Parking would have been difficult for the Workhorse, but doable.  Many of the numerous people milling about the town had dogs.  The dogs were not an option!  I had no desire or the energy to fight with Jagger if we would have decided to walk the area.  Jagger, however doing well with people now, cannot stand another dog or animal of any kind for that matter.  More training is in our future.  So that restricted the sight seeing to the truck which was fine with me.

Park City has many layers.  Some of the outer campgrounds would be nice as a destination.  You could spend a lot of time exploring here.  Deer Creek reservoir had some camps that looked really nice!  Again it in itself is a huge area. 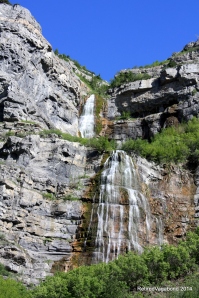 Last Friday, Jagger and I took a drive out to Bridal Falls looking for a short hike to get outdoors.  Bridal Falls is right off the highway and has several highly used, developed parks.  It’s a beautiful falls within a valley that reminds me a little of  the Highway 80 corridor in Oregon, along the Columbia River.  Much smaller in scale though. 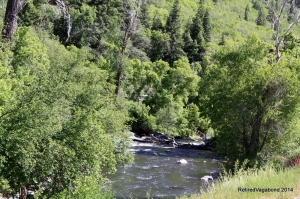 On the way back from Bridal Falls I decided to check out Lake Utah State Park, which was within walking distance of the camp where we are parked.  I hadn’t been in the State Park yet and was curious for future trips.  It look’s like a nice place to camp if your boating or just enjoying the sun, however I like camps with more trees or desert foliage.  The RV Park was pretty basic with Water and electric, but no sewer connections.  Each camp had a lot of room, which was nice.  They had several boat launches and a jetty you could go out on to fish.  I drove out as far as I dared and did a five point “u-turn” to go back.  It was pretty narrow for the Workhorse and water was on both sides.

I think I am ready to move on to my next camp.  Camping in an area so close to the “big city” is not my favorite and I am anxious to get to Montana I guess.