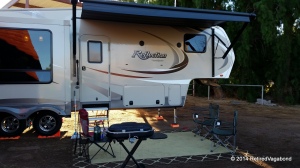 Barbecue Setup and ready to go

After several months of wintering here in Mesa, Arizona, I’ve had time to reflect on another of our past adventures. Specifically our visit last September to Upper and Lower Mesa Falls while staying in Island Park, Idaho.

Our travels had led us south from our homebase in Montana, through The Bannack Ghost Town and then to our camp in Island Park, Red Rock RV Park.

We woke early the morning of September 7th to a partially cloudy sky.  Jagger and I started the day by going for our morning walk, usually not more than a mile or so.  The weather was looking somewhat unpredictable, but still a beautiful morning. 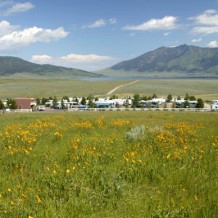 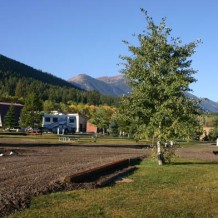 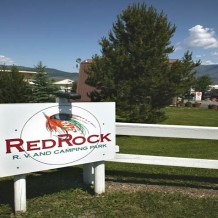 After our walk, it was time to explore.  Today I want to go to an area I have heard a few of our neighbors talking about, so off to Mesa Falls. Check out the link here to the Idaho Visitor’s page. Great pictures and articles about visiting this area. To get a true picture of the falls we are about to visit, you need to know a little history of the geology of this area.

Island Park is in the middle of Henry’s Fork Caldera formed by a super volcano about 1.3 million years ago.  The same time as Yellowstone basin was being formed nearby.  The volcano(s) formed this whole area including the Snake River Valley where we stayed earlier this year further South in Idaho, when we were on our way north to Montana.

After we pulled into the parking lot of the Mesa Falls Visitor Center, Jagger and I went for a short walk before I left him in the truck.  He is a pretty good sport about being left in the truck when I visit areas that dogs are not allowed.  I don’t like leaving him for any length of time in the Workhorse and won’t if the day is too warm, especially if there aren’t trees to park under.

I walk down a path to what used to be called the Big Falls Inn, built in 1915. Now it’s the Mesa Falls Visitor Center operated by our National Forest Service and in great shape. The visit inside is worth the stop. 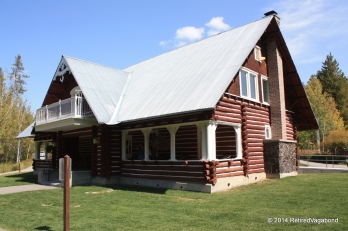 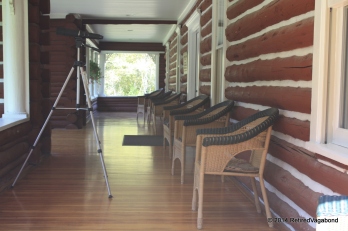 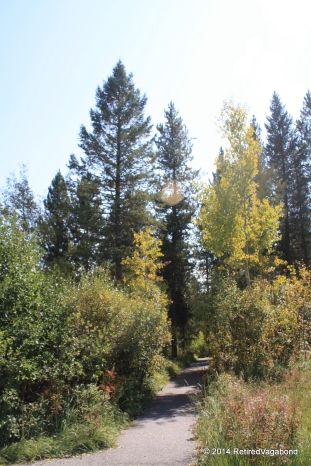 On leaving the center you start to hear the falls. The walk is not very far, although steep, there are steps and a boardwalk built along the way.  As I arrive at upper Mesa Falls I am immediately impressed at the the sheer size. 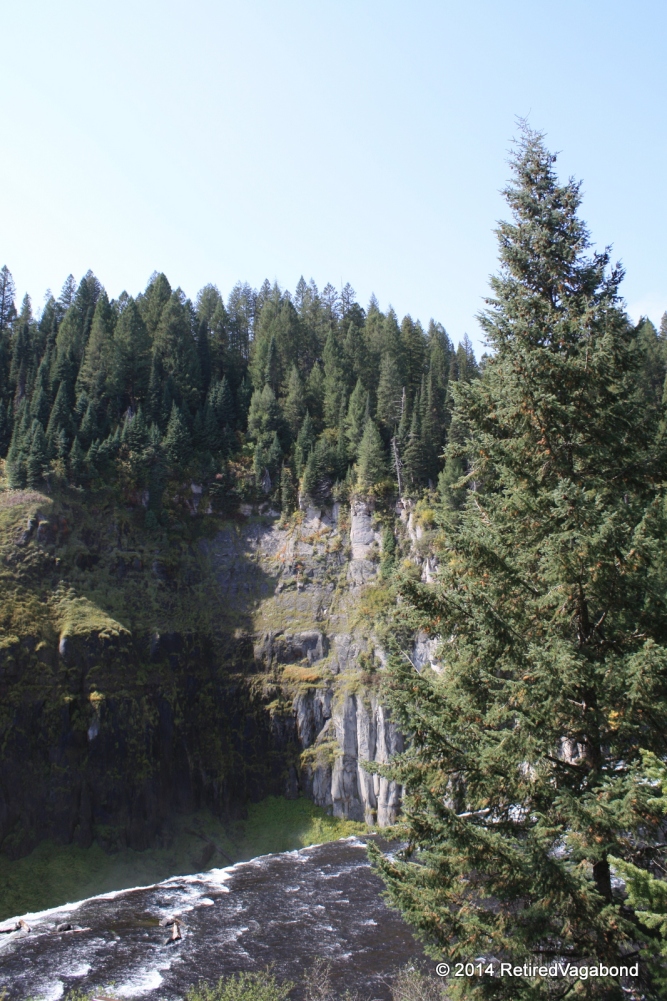 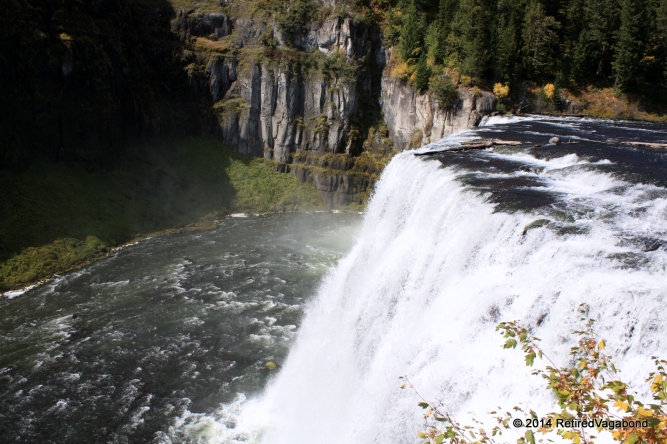 Over 200 feet across, it looks like the end of the world just drops off and the Mesa Falls carrying an average of 500 million gallons of water per day spills down 114 feet to the river below.   You can feel the pounding of the water as it hits the river.  The sight and sound is impressive.  I take the nature trail back up to the visitor center and bypass a portion to get back to Jagger, who is patiently waiting.  This has to be the highlight of my stop here in Island Park.

On to Lower Mesa Falls

Once back in the Workhorse, Jagger and I travel a short distance and arrive at the Lower Mesa Falls.  If you repeat my adventure, watch carefully for the sign, I almost missed it.

Here Jagger can venture with me meandering down the trail to the edge of the canyon.  This area is less traveled and we pass only a couple of people the entire time we are here.   I tried to snap a picture of Jagger, but he was so excited he wouldn’t stand still!

Looking over the cliff Lower Mesa Falls comes into view in the distance, along with a view of the immense valley created over the centuries by the “Henry’s Fork of the Snake River”.   It’s quite a site and hard to show just how big the falls are and how high we are with photo’s.  If you are in the area, it’s a definitely something you should see for yourself.  You can easily spend a whole day here and just scratch the surface.

Our Trip Back to Camp

Back we climb to the Workhorse, so we can return to our camp.  On our way home we stop at Robin’s Roost for groceries and propane.  As we come out I notice the weather is changing quickly.  Lucky we stocked up Jagger, we want to be prepared for the worst. 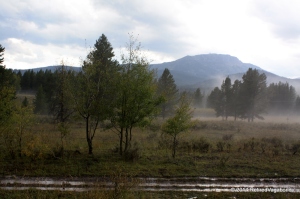 Back in the Workhorse we only traveled a short distance, when the sky turned black and opened up, pouring huge hail stones down on us.  Immense bolts of lightning streaked across the sky.  It felt like we crossed a time warp and went into prehistoric days.

I pulled over it got so bad. I didn’t want to risk damage to our Workhorse if I could prevent it.  Even stopped it felt like damage was being done on the roof of the cab.  There was no escape.  After a short while, that felt like an eternity, the storm moved on.  The damage perceived did not exist, we were fortunate.  We continued on to our camp and called it a day.

Until next time, safe travels … Gary 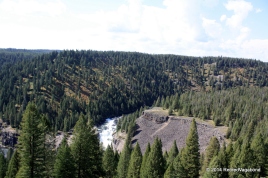 The Lower Mesa Falls below 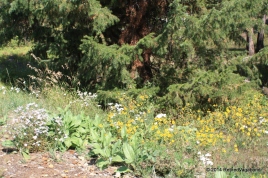