Busier Schedule Than The Normal Camp

No sooner did Jagger and I arrive at O’Neill Park; we had places to go and people to see, not to mention the doctor, dentist, tax accountant and optometrist. It was going to be a jam packed stay here in the OC, much different than most of my camps and I am looking forward to meeting up with family and friends.  “Maybe a month in California isn’t enough, huh Jagger”?

I drove out to Lake Elsinore, about an hours drive.  I left Jagger in the Coach, something I rarely do.  It was predicticted to be too hot for Jagger to remain in the truck.  I was meeting my Aunt Jean, cousin Ken and his wife Teresa for lunch. We had a nice lunch and a wonderful time catching up on their lives and my travels.  One of the things about travel is I get to see many family members and friends from all over.

On the way to my first appointment early the next morning we passed one of my friends, who still works at the company I retired from. He was on his way to work and recognised my Workhorse and Jagger riding in the back seat from my blog. He called me on my cell phone and we set up a time to meet for coffee and go for a hike at O’Neill Park the following morning. Jagger and I continued on to my Doctor’s appointment, of course Jagger waited in the Workhorse under a tree where I parked. 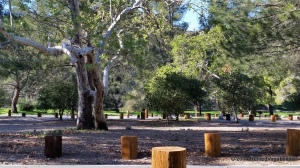 O’Neill Park, Across from camp

The following morning Rich met me at my Coach at 6:30 am with his dog Molly.  He mentioned her the previous morning and I told him she would be welcome too.  Before inviting them into the Coach, I put Jagger in his kennel.  I still never know if he will warm up to a dog.  We enjoyed conversation over our hot coffee, catching up on the latest from the office and life.

Rich with Mollie and Jagger

As we went outside into the clear crisp morning,  Rich suggested we introduce the dogs.  I brought Jagger out and it was a little tense at first, but they both accepted each others presence and off we went for our short hike.  Jagger was his usual energetic self, bounding here and there, yanking my arm occasionally.  He did behave however, when I gave the Heel command.  On our hike we only met one aggressive dog, that Jagger reacted to.  We did pass several and he didn’t seem afraid or aggressive.  Maybe because his new friend with us or he was showing off for Mollie?  I was pleased in any event. There was a time, if you remember, when I thought I may have to give him up.  It’s looking better everyday.  At this point that would crush both of us.  So we will continue to figure it out as we go.

After getting back to the Coach I got ready for breakfast with my daughter and following that lunch with my friend of many years, Tom, at Lucille’s Bar B Que.  Always a treat.  Again all great visits catching up on life and friendships.

Monday I will be meeting up with more friends from work, Lisa and Michaelle, both co-workers of many years.  We will be visiting Mimi’s for lunch.  One of our old hangouts.  Tuesday, I have my regular dental appointment.  Then Jagger and I will be moving once again to Doheny Beach State Park.  A place close to my heart, and hard to get a campsite at!  I used to come here surfing as a older teen along with friends from school.  High school days we hung out at Huntington Beach.