So on the third day the Park Ranger knocks on my door.  What? He asks me if I saw the notices on my truck the last few days.  No I say, as I step down from my Coach to check my Workhorse.  “Well I see that one!”, I reply.  He then proceeds to ask me if I paid for my campsite?  “Of course”, I tell him, “I paid in advance through next Tuesday, weeks ago online”.  He accepts that, then we talk about life.  It turns out he knows my daughter-in-laws brother who used to work at Doheny Beach and is now a California State Park Ranger and speaks highly of him.  As he leaves he says he will get it straightened out for me.  We didn’t see him again.

Later that morning I head up to Costa Mesa to attend the church my Son and Daughter-in-law attend.  Afterwards we go out for a great lunch at Mendocino Farms, in Costa Mesa on Seventh Street.  An unusual combination of ingredients make this place unique and delicious.  It’s rated 4.5 stars on Yelp and I would agree.  Minus the half star because there were no heaters outside for this rainy, cold day. 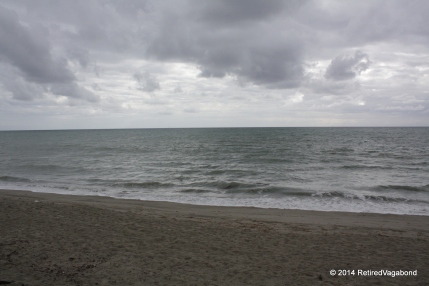 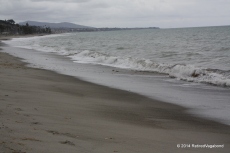 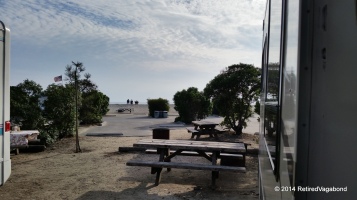 The cold wind blows the flag in the background 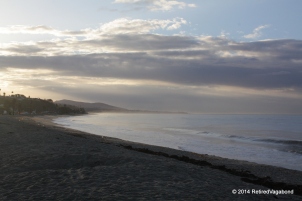 Back at the Beach

This afternoon turns grey and stormy at the beach. Jagger and I decide to go for a walk and I stop to shoot a couple of stormy looking pictures.  Then we head back to the Coach to relax and catch up on my blog, while watching the trees and a nearby flag blown around by the cold wind coming off the ocean.

I open my laptop and see the date, something clicks…wait a minute the tag on my truck says it expired two days ago?  Senior moment pause…Oh, I forgot, I made the reservations in two segments due to a change in our plans.  Yikes, I load Jagger up in the Workhorse, of course he is excited to go no matter what the reason.  We rush down to the front gate at 15 MPH and start to explain what happened.  I no sooner get to the second sentence and the young man interrupts me by saying are you Mr. Wood? Oh why yes.  They had my sticker on the desk and were about to put me as a no show (two days later).  Anyway I guess I am famous here now and legal for a few more days.

Jagger sleeping by the fireplace

I am a little concerned about my batteries as the day has been very cloudy and dark.  The controller shows the batteries are at about 75% and it’s almost sunset.  “Looks like we will be dark tonight Jagger”. This is to conserve our battery.  I have a small battery operated lantern and this will be the first time we use it.  I turn it on and immediately I am disappointed by the very dim light coming from it.  I can’t blame this on Jagger, I picked it out and chose the smaller one.  Some day I will replace it, but for now it at least it’s a little light.

Later, I decide to go out to eat dinner tonight, even though it’s rainy.  I will probably do a “drive by”, I mean fast food, as I want to take Jagger and it’s raining.  This also to conserve my battery as I am not sure just how far the 75% will get me.