Jagger and I left the shade at Doheny Beach parking lot and headed South towards San Clemente.  Eventually we arrive safely at San Mateo State Park, located just outside Camp Pendleton Marine Base.  There Jagger and I entertained several of my grandchildren for a few days.  Going for walks, a treasure hunt and a bike ride.  Something new introduced into my routine.  On my trip by the “Storage room” I picked up my bike and helmet.  Also I went back to my doctor so he could recheck my incision from some minor surgery.  He wasn’t satisfied with the healing process and asked me to extend my stay here in California. 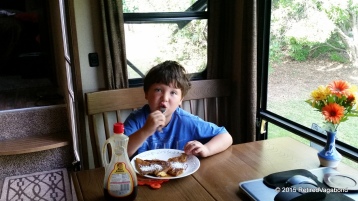 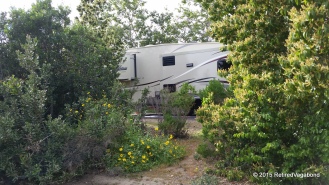 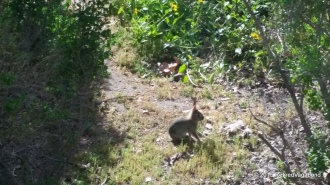 As any of you know traveling full time, a change in plans is not a big deal unless you are in a populated area with vacations approaching and the weekends.  Everything books up quickly.  I made a few searches and was able to book a few more weeks with one exception, a Saturday night, March 7th.  During the next few weeks Jagger and I were able to visit O’Neill Park again.

When March 7th approached I contacted the OC Fairgrounds.  I read that they have a RV Park, but what would it be like?  Well Jagger sounds good to me.  It’s that or a Walmart parking lot.  Their policy is a “first come, first serve” basis and on our arrival we had a pleasant surprise.  A very open campground with full hookups and not many RV’s here at this time.  The only area of the fairgrounds with any people was one section that has a “Marketplace” every Saturday and Sunday.  The rest of the fairgrounds was absolutely empty.  Kind of fun for Jagger and I walking around checking facilities out with not a soul around. 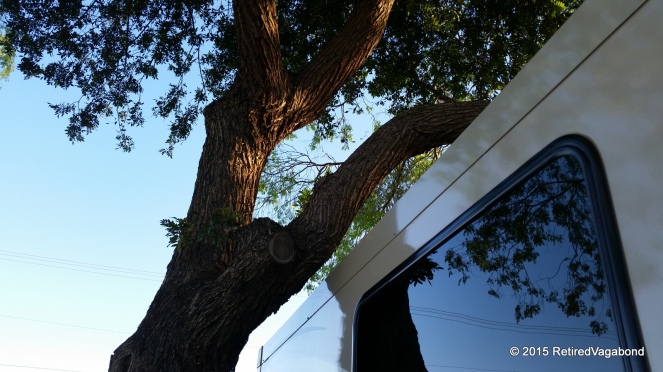 Back to O’Neill Park

On Sunday afternoon Jagger and I leave the fairgrounds and head back to O’Neill Park once again.  I was able to book six more days here before hitting the maximum 14 day limit.  Jagger and I really enjoy O’Neill Park, not only for the solitude (during the week), but the trees and it’s near to friends and family.  We had several special visitors, enjoying lunches and a dinner out.  Thanks Tom and Rich, meals were great, especially the company.

My Son and his Wife treated me to a great dinner at The Cheesecake Factory in Fashion Island, Newport Beach, the last night Jagger and I stayed at O’Neill Park.  Of course, again Jagger had to stay home for this one.

As our stay came to an end at O’Neill, yes back to San Mateo State Park.  It got to be a little crazy, but we always had a place to camp.  I went back to the doctor again and still he asked me to delay my travels East.  Hopefully this will be the last move as I have another appointment with my doctor next week.  Even though it’s been a problem extending my stay, I appreciate my doctors concerns.  He knows I am traveling full time and wants to make sure I heal up properly.

RIP Jane O’Rourke – Prayers for Comfort for Dick her husband

Jagger and I had only spent one night back at San Mateo when I received some startling and sad news from my family in Arizona.

My Mother-in-law had passed away peacefully in her sleep, after having surgery for an aortic aneurysm.

She always had a kind word to say to all that knew her and supported her family of two daughters and husbands, one son and his wife, nine grandchildren and six great-grandchildren.

Jane loved to entertain family and friends and was a wonderful cook, especially known and teased about her brisket 🙂

Jane served as a nurse for her long, successful career.  In the 1960’s through late 1970’s she worked with Dr. Colley, one of three founders of the Bristol Park Medical Group in Orange County California.  In the 1990’s she returned, as the practice grew working at the corporate office as employee nurse to hundreds of employees.  She met many associates who became close friends over the years and retired from that position in the late 1990’s.

Bristol Park Medical Group grew from one office, when I first met Jane and Dr. Colley in 1976, to fourteen offices before Memorialcare purchased the group just a few years ago.  Many of my children also had early working experiences with Bristol Park.

She was known for always being available for those hurting or those with no place to go.  Many of my childrens friends called her “Grandma Jane”.  When I asked a few of the great-grandchildren what they remembered about grandma they mentioned how she spoiled them with candy, ice cream and marshmallows (of course hugs and kisses).  They also mentioned she spoiled the visiting family dogs with many treats.

Hugs to my family and prayers for peace and healing the big hole left in our hearts.  She will now be one of the many greeting us as we arrive in heaven one day.

Until next time Safe Travels…Gary