I left a little late to avoid the heat of the day.  I had to leave Jagger at home so I wanted to make sure he was taken care of and had a walk.  During my outing I would be going into exhibits and museums that Jagger would not be welcomed.

He seems to do quite well in the Coach by himself. I have never had a neighbor complain of barking, even when I ask how he did while I was gone.  Only once did he bark, that I know about.  It was when my daughters neighbor came onto her property to shoe Romeo (their horse).  To reach the pasture where Romeo was kept, Curt had to pass right in front of the Coach.

Curt said: “I’m glad Jagger was locked up in the Coach, I think he would have taken off my leg”.  When camping at a sites, Jagger is usually pretty quiet.  I follow some of the tips regarding full time travels with your dog a blogger just posted recently, Love Your RV.  He has some good ones, most of which I already do.  One was to leave the shades down and leave on a radio.  Usually I leave him no more than a few hours.

On my drive to Tombstone, I notice the pleasant scenery I have become accustomed to in the desert.  The first thing I come to when I arrive is Tombstone’s Boothill Cemetery.  I stop and give a few dollars up to maintain the cemetery, as I enter the building and sign my name on the guest book.  While walking through the headstones I can’t help but notice how many souls were victim to a violent ending.  After spending some time imagining the lives they lived, I moved on to town.

In town the first place I stop is the Tombstone County Court, now a museum and a State Historic site.  Again I walk the halls of those gone now and try to imagine the activities that took place here well over a hundred years ago.  My understanding is the courtroom is much the same as it was during the OK Corral gunfight days.  They have a short video with a reenactment of a trial where a child was killed over a water dispute.  I also took in the Sheriff’s office, located in the building and out back the gallows and a small jail (or what was left of it).

Yes this is the Original Birdcage Theatre

By today’s standards the Birdcage theatre was definitely a wild place.  On entering your attention is brought to the numerous bullet holes still in the walls.  When entering the main “theatre” you see the stage where so many preformed their “talents” and the famous “birdcage” above, where ladies of the night were on display.  On the second story overlooking the main floor, private boxes were open, along with very small “private” rooms behind for their “guests”.  Of course, there was also a “back room” where guests with allot of money to loose could gamble twenty four hours a day. The amount of items on display was overwhelming and worth the $10 admission, but for me it was a little depressing, being reminded of the absolute wildness of some of the town people and guests. 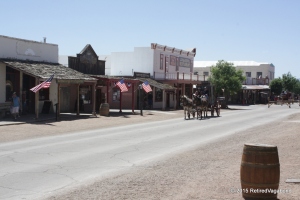 On my walk back to the Workhorse, I chose a path down the main street.  The number of establishments wanting to charge you to enter was amazing.  Easily more establishments than people visiting on this weekday afternoon.  I quickly figured out that this could be more expensive than a trip to Disneyland.  On the street there were several “cowpokes” and “gunslingers”, most of whom were enticing you to see the full show in their establishments.  Even the Ok Corral was walled in with a modest entrance fee.  It is worth the trip here to see what it was all about in days gone by and I will probably return again one day to see some more. But now I need to  get back to my buddy, Jagger.

Until next time, Safe travels…Gary