On Wednesday the fresh water sources bacteria level here at Tuttle Creek became to high to use and the BLM Ranger, who tests it daily, shut the it down.

Jagger and I walked by this morning as the wind was whipping up. The black trash bag used to cover the closed water faucet was slapping in the wind and alerted Jagger to a new enemy. Yes he still attacks things he doesn’t understand! I spent a few minutes here until he made friends and then we moved on to other challenges.

Since I am using an average of 10 gallons per day for cleaning and showering, our Host directed me to use the water source at Portagee Joe Campground which is just outside the city of Lone Pine. 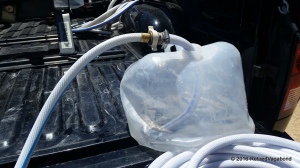 When Jagger and I arrived there was nobody here. This Inyo County campground is not published in very many locations and I wasn’t aware it even existed. While I was filling our portable bladders, I let Jagger off leash for a run and boy did he go! Once I filled up the two five gallon bladders we headed back to the Coach to pump the water into our fresh water tank.

I’ve read several blogs recommending the film museum in Lone Pine. So I decided today would be a good day to visit, before the weekend crowds comes into Lone Pine. Leaving Jagger to guard the Coach, I drove into town and South to the museum arriving right when they opened the doors. I wasn’t the first guest to arrive.

Once inside I’m amazed at the number pieces that were on display in such a small area. As I walked through the aisles and room of memorabilia, memories flooded my mind of days when I was much younger. Roy Rogers and Dale Evans, Bonanza, Hopalong Cassidy, The Lone Ranger and Tonto, John Wayne were just a few of the many actors mentioned and on display here.  They all had one thing in common. They were part of the Lone Pine filming history. Most of it done on Alabama Hills locations, just outside of town. 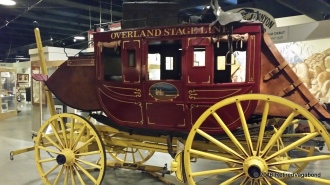 I definitely recommend visiting this museum if you pass through Lone Pine. If you are staying for more than a day, I would also recommend visiting the museum early and purchase the printed maps of locations where the movies were filmed. That way you can visit and imagine what went into the making of each film, knowing your favorite actors once walked the grounds as you visit the specific locations.

When I left the museum I headed back to camp to relieve Jagger of guard duty any spend another lazy day around camp reading. We don’t have electric hook-ups here so no options for watching a movie tonight.

Mount Whitney is one of the backdrops for our camp. Of course it’s the largest of the landmarks and still covered in snow because of its elevation. Since we arrived the mountain ranges on both sides of us had a dusting of fresh Spring snow. The “White Mountain Range” has definitely retained its “white” appearance.

There are many businesses in Lone Pine, along with streets named after Mount Whitney. In my desire to do a little exploring of the area around us, we head up Whitney Portal road to get a closer look.

It’s less than a thirty minute drive from camp and a twenty degree drop in temperature, which was refreshing on this 80 plus degree day. If you don’t like heights the drive is a little spooky though. The two lane highway is plenty wide for even the workhorse with another vehicle passing, it’s just that the steep road has drop off’s of hundreds of feet straight down that may get to you!

Straight down over the cliff

The young lady at the Film Museum said they are widening the Whitney Portal road, but I’m not sure if that includes the road all the way to the top.

Once you are at the trailhead you notice not only the cold rushing stream with waterfalls, but that this area is designed for a LOT of visitors. There are several trailers, but I believe those are for Rangers and their families. I wouldn’t want to bring my Coach up here, it’s just too steep for my comfort. The walk-in tent sites are all empty this afternoon. It will be cold here tonight, probably at freezing temperatures.

Looking around I see many signs warning of bears, but Jagger and I don’t see any at the moment. In fact we don’t see much of anyone. We have the overflow area that I turned into, all to ourselves. In just a few short weeks this area will be packed with hikers going up the mountain and also those stopping off who are hiking the Pacific Crest Trail.

The evening is approaching quickly, so Jagger and I need to load up for the short (steep) drive down the hill to camp.

So long for now, Safe Travels…Gary