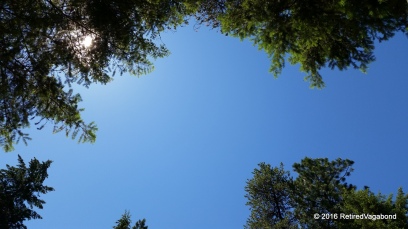 View from the lounge chair

Today was another warm day with clear skies. A great day to relax, read a book and watch the river flow by our camp. This morning Mollie, the Campground Host who fills in for Sharon dropped by and introduced herself. She’s a nice lady also and seems dedicated to taking care of the park. She fills in on Sunday and Monday so Sharon can have a couple of days off to recuperate.

When evening came I visited a small restaurant in town that Sharon had recommended. Minnie’s is a small coffee shop featuring home cooking. Since the weather had cooled down a little I brought Jagger and left him in the Workhorse parked out front, while I enjoyed my meal. This is the first “sit-down” restaurant meal I’ve had in a long time.

My destination was Plains, Montana. Plains is the next small town along highway 200. It’s similar to Thompson Falls. Both have a population of just over a thousand citizens and a few businesses along the main street in town. When we reach the end of town, I turned the Workhorse around and we then headed back to camp.

When I returned to camp I noticed that Jagger and I had some new neighbors. The “Montana Conservation Corp” had pulled in to the large campsite next to us. Their group looked like it included about six or seven youth and a couple of mentors. I noticed they were down by the river enjoying the evening and some playing in the cool water of the Clarks Fork.

I then left Jagger outside on his lead while I unloaded a few item from the Workhorse and got settled. When I came back outside I met one of the campers from the Montana Corps walking by our camp. She ask me if I saw the bear. WHAT? WHERE? She then told me over there, pointing to their campsite. This is not good, but at least there was some distance!

I thanked her for the information and walked towards the bear slowly. No I was not going to pet it, but Jagger was tied to his lead in that direction and I needed to get him before we had any trouble.

Initially Jagger had barked a few times, but I thought it was due to the lady approaching, but no it was the bear! As I walked slowly towards the bear, to my surprise, the bear turned and moved away. You can see the blurry picture here that I took after the bear moved at least 100 feet away.

Preparing for the Fourth of July

I was prepared to grab Jagger and run to the Coach slamming the door on my way in, however I knew I needed to move slowly, not threatening the bear in anyway. Once Jagger was in the Coach, I turned making sure the bear was not coming our direction and I snapped a picture as he meandered away from our camp. A very stimulating evening and my first experience with a bear since I starting my travels over two years ago.

Hmm, after thinking about our encounter with our visitor, it he became aggressive bear spray wouldn’t have helped at all, as I wouldn’t have thought to have it with me during this type of camp activity. Anyway I am continuing to think about that day, if it ever comes, that I may be confronted by a grizzly. Heaven forbid!

Oh, The bear in the header photo was taken in yellowstone from the safety of my car 😉 If I encountered that one face to face I don’t know what I would do. I stayed in my car, but I couldn’t believe the number of people getting out of the relative safety of their vehicles to get that special “close-up”. They are crazy!