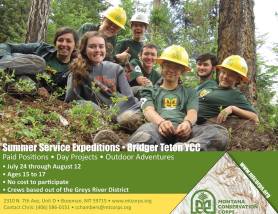 Yesterday morning one of the Montana Conservation Corp leaders from the campsite next to ours walked by our camp and we struck up a conversation. During our conversation I asked what project they were working on here and she explained they were repairing a border fence nearby, replacing “bob wire” with regular wire. They will be leaving their camp on Saturday, after Jagger and I have already moved on down the road. I have a lot of respect for this group. I admire their energy and dedication to our environment. It seems like a great start for those young people having a rough time adjusting to adulthood and creating a sense of community. During their stay here they have been good neighbors.

Trip to Kootenai Falls and River

Today Jagger and I will be exploring Kootenai Falls. It’s another stellar day, warm with a few puffy clouds scattered around the big Montana sky. The weatherman is predicting a warmer day than it has been the past few days. As a result Jagger I are off shortly after breakfast to avoid the afternoon heat. 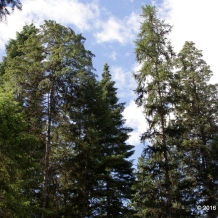 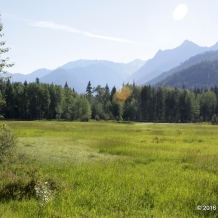 Daisies in the meadow

Driving along the highway 56, I am able to stop a few times to absorb the surroundings, soaking in nature’s beauty and grab a picture or two. This area is my favorite type of landscape, with lots of tall green trees, flowers with color and a lake, river or stream flowing nearby. It has a way of cleaning out the cobwebs of you mind, giving you a fresh look on the day.

When we arrive at the trailhead for the Kootenai Falls, I park the Workhorse and take a look around assessing the number of people here and if they have dogs that we will meet on the trail. There is a small snack shop, but they aren’t open yet. Also there’s an artist here, displaying his woodwork for sale on a bench in the trees. I stopped and visited with him for awhile and then Jagger and I were off on our trek.

Bridge over the railroad lines on Kootenai Falls hike

I could tell the trails were well used, but not many visitors here yet. Jagger and I walked about a quarter of a mile before coming to a bridge that would take us over the railroad tracks. I was disappointed to see this. A bridge made of steel with slits and rather sharp edges to allow for the weight and drainage of snow. Also it was probably three to four stories high. With the design you could see right through the steps to the ground probably fifty feet below. It would be nice if I had a picture to display here, but again I was to worried about Jagger to remember. I made a decision, not to expose Jagger’s paws to the sharp steps and we returned to the truck.

After getting Jagger settled, I went back to finish my hike to the Kootenai river, much less excited about the hike now because I missed my companion. But nevertheless I want to see the falls and snap a few photos. After crossing the bridge and tackling the stairs, I had to hike about another quarter of a mile of mostly level trail. Arriving at the river it was a wonderful sight to see and well worth the hike. I climbed around on the rocks, jockeying to get the best shots for my photo collection. There was only one other young man here exploring, so it was easy to capture some pictures without people decorating the scene.

On my hike back I encountered many visitors heading to the falls. I was glad I had an early start today. I may be a bit of a hermit at times, enjoying the solitude of the mountains, without all the tourists 😉 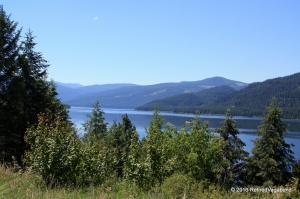 When I returned to the truck, Jagger was happy to see me. The “snack shop” was just opening. I gave them a little business as it was lunch time and I didn’t bring lunch with me. What was I thinking? Then we headed back to camp, about a pleasant hours drive through the lush Kootenai forest, my favorite.