[alert-announce]Just published my somewhat small list of places I’ve taken or had maintenance done on the Coach. There you will find a short review for each place: Visit: Coach Repair Facility List. I’m not complaining, I’m glad the list is small![/alert-announce] 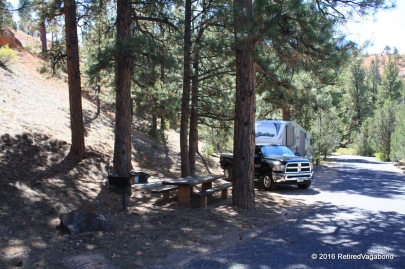 First thing this morning Jagger and I are out the door. We moseyed around the campground loops breathing in the fresh scent of the pine trees.  Once Jagger gave me his blessing, we headed towards camp. Just as we were arriving, we crossed paths with another camper. He introduced himself as Terry from Chicago.

He’s an interesting guy, full timing now for 17 years in a C Class motorhome. We chatted for probably an hour, while I’m mentally noting some great tips for full timing and the surrounding area.

As a host approached we drifted from the middle of the narrow campground road to the side. On her second trip, she stops her custom ranger host vehicle and says, “I may start charging you guys a daily fee for the chat room you’ve set up in the middle of the road!” We all chuckled, visited awhile, then she went on about her daily tasks.

We were about to say good day to Terry when John and Alice from Ohio, who were also staying in a C class down the road a few sites, ventured over for a quick visit. They’re on vacation and seriously considering the full-time life as they are getting ready to retire next year. They mentioned they have a vacation home in NC where they plan to spend summers. John works in Radiology, Alice is a nurse practitioner. I excused myself after realizing the time that had passed. Terry continued to visit with them answering questions about full-time travel.

Back at the Coach, Jagger and I are ready for our short trip to Bryce Canyon National Park. Since Jagger is tagging along, we will be sticking primarily to the parking areas. “You aren’t allowed in this kind of park,” I tell Jagger. I’m almost positive he understands me as he settles in his favorite spot. Like most National Parks the places you can take your dog is limited due to exposure of the land and wildlife from our little pets, ah Sidekicks.

As we enter the park I’m expecting a big line, but I guess we timed it right. Terry told us earlier that they only allow a certain number of vehicles into the park. Once they max out they hold anymore from entering. Then when a car exits they let one enter. Waiting my turn in line wouldn’t be so bad with Jagger to keep me company. But I couldn’t imagine having a couple of excited kids in the back, not knowing how long we would have to sit there.

I give the Ranger my “America the Beautiful” Senior pass in exchange for free entry. Jagger is not a senior but he is allowed to enter on my pass for free too. It’s a nice perk for my little Sidekick. He stands tall and proud on the backseat, “It’s because of your good looks that we get in free everywhere, Jagger.” Doesn’t hurt to boost his ego every once in a while.  Once we pass the commercialized area, we experience views that live up to the hype. My words and pictures here don’t do Bryce Canyon justice, at all. As usual, there is a link below for more photos if you’re so inclined. 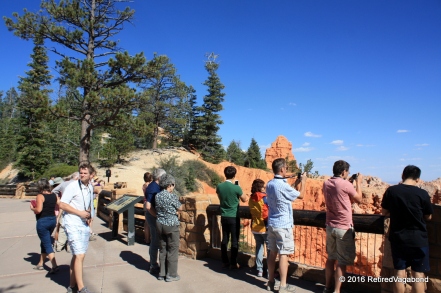 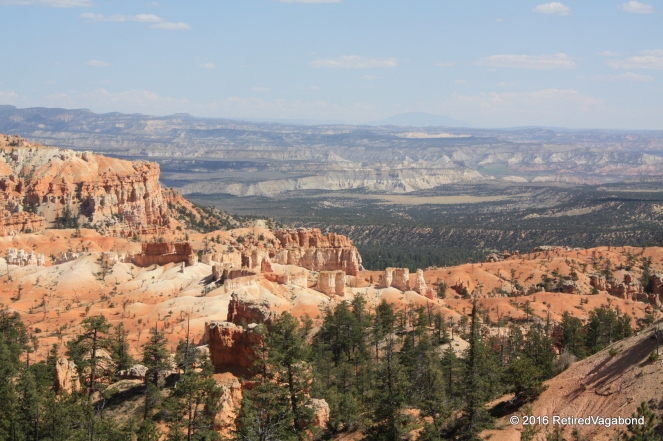 My only negative comment about Bryce Canyon National Park, you already have heard me say about other National Parks, “too many people”. It is, however, less crowded than I had imagined, maybe because it’s the end of the season.

After stopping at every view, turnout, and trailhead, Jagger and I head out of the park tired and hungry. Chalking up another National Park on our “visited” list. Before turning on the main highway, I pull into a parking lot where I spotted a Subway. Most fast food windows share dog treats, if they don’t I have a stash in my center console. Jagger pokes his head between my seat and the window, waiting for his. He let out a big sigh, disappointed he wouldn’t be getting his “drive-thru treat” when I shut off the engine to go in for my sandwich.

After getting my order, I sit at a table near a window so I can see Jagger in the Workhorse. Unfortunately, he sees me first. We lock eyes and I get the stare down. That speeds up my dining experience, eating my sandwich faster than normal to be reunited with my anxious Sidekick. I open the center console and give Jagger a guilt treat. “Let’s go home, Jagger.” We head back to our camp eager for a little relaxation after a very full day.

[alert-note]After writing almost triple my normal posts over the last few months, we are approaching Jagger and my current location in Arizona. Thanks for being patient as I work through my Journal. This is the first year I haven’t skipped any of the many places we have experienced. [/alert-note]

Tagged as: Australian Shepherd, Bryce Canyon National Park, Full Time Rving, Jagger, places to visit in Utah, Red Canyon Campground, things to do in Utah, things to do with dog, traveling with dog