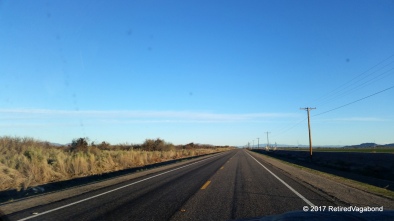 Pulling our Coach down Highway 87 has become a familiar task for me over the last three plus years. It’s a pleasant drive most of the way, with a few steep downgrades as we travel through the green forest. In a short time the scenery starts to change and the weather warms as we drive into the Phoenix desert basin. We are approaching our winter camp for this year at Apache Wells RV Park. While I’ve heard the price will be changing for 2017, I couldn’t pass up the deal they give for the last quarter of the 2016 year.

When Jagger and I arrive, we back the Coach into site #91 where she will be for well over two months.

After safely securing the tires with chocks, extending the jacks and lowering the stabilizers, I put out a few chairs and a small table. We have officially landed at our winter home once again. I text my children living in the area, letting them know that I made it safely and I’m ready to let the family fun begin. I look at Jagger during my conversation, he has that look of knowing something special is about to happen with his boys, Jax and Phoebe, he’s right! 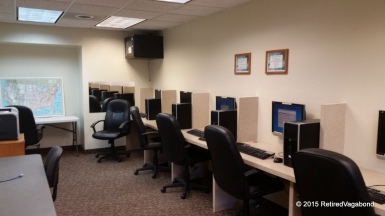 While RV Parks aren’t my favorite camp style, this park is very nice with all the amenities. Yes, even a free computer room if you don’t have your own.

The sites are pretty standard for RV Parks. Not a lot of privacy and you get to know your neighbors pretty quickly. As it turns out the site right next to us will be empty the entire time we are here.

Neighbor next down (two sites down)

Shortly after I arrive a cold virus finds me and I spend the next few weeks kicking it. It was when I finally started to get a good night’s sleep, that at three o’clock am I woke hearing a terrible loud noise. “What now?!” I thought as I jumped out of my bed into reality.

First I thought it was a broken pipe in the bathroom. I quickly looked, imagining my Coach filling with water, one of a RVer’s worst nightmares. Damage can happen quickly. The result later is mold and/or side separation. The water continues to swish out the opening somewhere.

It wasn’t in the bathroom, so I put my moccasins on and head outdoors. Once I clambered down the steps, I head for the water hydrant and quickly turn off the fresh water coming into the Coach. Of course it’s still dark out, I stumble over to the Coaches basement and open it up to see what damage has occurred, thinking the worst. I left the basement open and went back to bed. Maybe I can salvage a little sleep tonight.

Cleaning Up The Mess 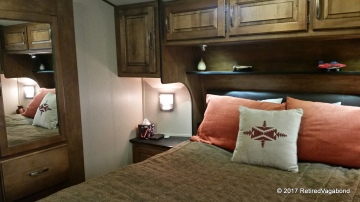 On waking this morning, I went back to the basement and spread out every towel I could lay my hands on. Fortunately the temps will be in the high 90’s today and most of the moisture will dry out quickly.

I then start testing the water system to find out what is actually causing the problem. It looks like the Flo-jet  water pump pre-filter cap blew out from too much pressure. Hmm,  I know I have a pressure regulator on the incoming water line and I just refreshed it with a new one last year. I test some more, but can’t get it to hold so I go on Amazon and order a new Flo-Jet filter for $16, marking it for next day delivery. 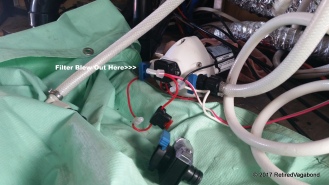 I next got out my Flo-jet water pump manual along with  the Anderson Kantleak control valve manual out and study both. I still can’t find any other resolution so I email Anderson. They are the makers of the Kantleak valve. In the email I explain the rebuild I did to the value in Montana in detail. I also told them, there seemed to be pressure on the pump, even though I was hooked up to city water. Ron, from Anderson’s response team was very quick. He said it sounded like we did everything right on the rebuild. The only thing he could think of was the valve handle may have been rotated 180°.

After hearing this, the wheels slowly began to turn (hear the creaking). I needed to ponder this dilemma.

This explains why after reassembling the Kantleak valve in Montana, the diagrams printed on the Coach’s basement door were not functioning correctly. Now they are correct. The only reason this hadn’t blown out before was I had been using only the pump since leaving Montana boondocking  so there was no pressure on the line. When I arrived here two weeks ago I started using pressurized city water and it finally blew. I am SOOOO thankful it happened in the middle of the night and not when I was away from the Coach for hours. Returning to that mess would have just about caused me to hang up my keys for good.

Note to self: Continue turning off the water when leaving the Coach, no matter how long. Also use the onboard freshwater system all the time and eliminate the pressurized water source issues altogether. This also will alert when there is any kind of leak in the water system, as the water pump will keep pressurizing just like an alarm. 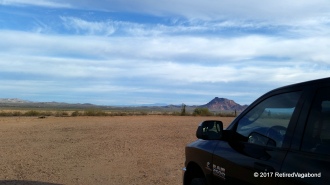 Jagger’s playground for the Fall 2016 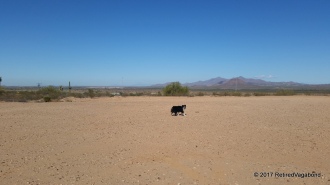 After resolving what needed to be done, Jagger and I took a break and went to the desert for a run, he ran.. I pondered. He enjoys the exercise but it seems to me he is ready for a playdate. 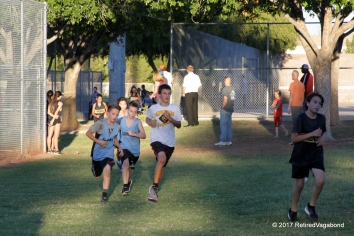 In the afternoon I leave Jagger in the Coach and drive the Workhorse to Aiden’s cross-country event at his school. It’s the championships and his first 6th grade school year competition. I’m so proud of him for sticking with this. It reminds me of several of my own children growing up.

Their school finishes in second place and though he wasn’t in the top ten finishing out of hundreds competing,  he tied his best record and I think he really grew through the process.

Afterwards I return home to an excited Jagger. It was a nice day, especially considering I wasn’t feeling the best.