Dinner at the Cold Spring

Yesterday afternoon my Son gave me a call to let me know they were on their way North. He was driving with his wife from the Orange County area of Southern California. The first of two nights, they stayed with family in the Santa Barbara area and tonight we will all enjoy dinner together at a famous dinner stop, “Cold Spring Tavern” here in the Santa Ynez valley. It’s only about ten minutes from our camp, tucked in a quiet shady hiding spot. 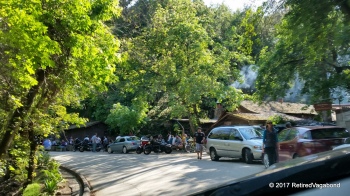 Cold Spring Tavern – On the Weekend

Originally this tavern was built along a road between the Mission Santa Barbara and its farm at Ranch San Marcos in the valley of Santa Ynez. Later the road was improved for a stage line and the tavern was built as a rest stop around 1870 and has been operating as such ever since. When I told my friend Tom the area I would be staying in this year, he mentioned what a great area it was and he and his wife had gone to this tavern.

This morning has turned out to be another wonderful day here in the green valleys of California. Rain has been predicted later, but so far the weather is beautiful.

Jagger and I did our regular morning routines and before I knew it, most the day had passed us by with little accomplished. Early afternoon, I left Jagger in the Coach for a short time while I walked over to the restrooms across the campground. On the way back I stopped by a neighbor’s camp who I had met a few days ago.  Darl is in the process of restoring his Laredo fifth wheel. We visited for a few moments and I could see that he was working, so I started to excuse myself, but before I did he asked if I would mind helping him. “Sure” I said, “as long as it’s not too physical, I’m not as spry as I once used to be.” He was in the process of putting a solar package on his roof and running the wires into the panels inside. He pointed out some wires hanging out of his front storage compartment saying, “these wires are attached to my solar panels already I just need to feed them through the conduit to the controller inside.” He then went inside a pulled the cables as I pushed them through the small opening. It only took a few minutes with both of us working together and he was a happy camper to get the project moving along. I then excused myself and continued my walk around the camp and back to Jagger, who was staring at me across the open grassy field.

“Oh my, look at the time Jagger.” As I got ready for the night the Sun started to ride low in the horizon, dropping behind the mountains around our camp and the air cooled. Once I was ready to leave, I said good bye to my furry friend and left to meet my Son and his wife at the restaurant a short drive away. 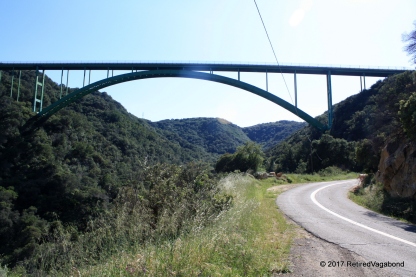 Cold Spring Tavern – On the Weekend

When I arrived I found a place to park with some difficulty, not too far down the narrow road. I’m glad I got here early, finding a parking spot for the Workhorse is always a challenge, but especially here it seems. I pulled off the road into the soft and now becoming muddy shoulder of the road. It was starting to rain and there would be a short walk to the restaurant. My Son, his wife and her Sister, along with her husband and cute young daughter arrived after I waited a short time. It was so good to see them once again after a few weeks of absence, since driving north. We were led to our table by the host, passing through the rooms that were haphazardly built over the last 150 years. The floor gave and squeaked singing it’s welcome to the historic Cold Spring Tavern  as we passed through.

After a wonderful dinner, we all parted. Saying our goodbyes to some of our family members, then I went out in the now steady rain to find my truck. It was pitch black and many more vehicles now lined the narrow road. After some effort I found the Workhorse and struggled to turn around on the dark, wet road. Soon my Son and his wife caught up to me and I led them back to the camp. There we found an excited Jagger waiting to greet us.

Another short visit followed, then we got ready for a quiet night with the patter of rain lulling us to sleep. As my eyes close I think of an exciting tomorrow that awaits.