Our move to San Simeon State Beach Campground was less than an hour’s drive. It’s not my first trip to this area, but my first stay at this state park.

When making my reservation online I paid but was unable to select a site. Once I had arrived, I had still not been assigned to a specific site so I was able to choose which one I wanted. I was astonished they didn’t allow my selection online when a map with descriptions was available. Now I don’t know what to select, it was my first visit to this park.

Arriving at the entrance gate, I get out of the truck and go over to the window so I can check in. After talking with the California Host, he assigns me a campsite and gives me all the appropriate paperwork.

Back in the truck, I pull the Coach forward, down the paved campground road. The site I’m assigned is somewhat overgrown. “Jagger, I don’t think we can fit here due to the low branches.” Our Coach needs a 12′ height clearance. I drive around checking out other sites nearby that appear available and drive back up the hill to the entrance gate. I then do a three-point turn (with the Coach attached) and pull back through the entrance. Pulling forward, I stop and tell him the site won’t work. I suggest sites I’ve noted from my drive around the park.

After comparing with his reservations, we finally get assigned to one. We just barely fit. The way the park campsites are designed, there is plenty of room between campsites, but the paved sites are very short. The Coach’s back tires bump the cement bumper and we call it home for the next six days. I finish setting up camp and release Jagger in our little home.

I was a little disappointed to learn that dogs were not allowed on the beach or down any of the trails. For those that don’t clean up after their dog, that’s probably a good thing. Although, it seems most owners aren’t like that. Jagger and I spent the next several days driving to beaches where he could play on the sand and get his paws wet. Also, we visited many areas along the coast that I hadn’t seen in over ten years. Some of the areas nearby have some sad memories for me and weren’t so much fun. Never the less, sometimes we have to visit our old haunts and replace them with new memories. This trip helped do just that. 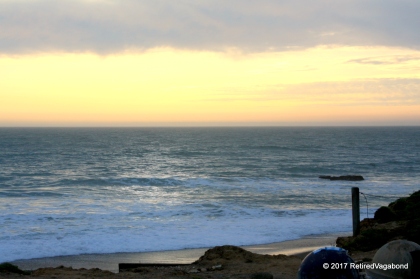 Even a drive to the grocery store is a beautiful trip.

Today Jagger and I return from a trip to the store and find new neighbors setting up camp. I stop and introduce myself to the young couple and their two young children. Drew and Danielle are camping here for the holiday weekend. Drew, as it turns out, is a Police Officer with a local department not far away.

It seems during my travels, in good times and in bad, I’m always reminded that someone is watching out for me. At my last camp, having a few items stolen, and at the very next camp having a policeman right, next door gives me some confidence. It turns out their 3-day vacation as my neighbors have given me a more positive outlook. Thank you, Dan and Danielle, (and their children) 🙂

San Simeon Campground Amphitheater – Overgrown and not used for some time.

The following morning I noticed Drew was attempting to run a hose to a nearby faucet to fill the fresh water tank so they wouldn’t have to move the trailer. Unfortunately, the hose wasn’t long enough so he asked me if I had one he could use. “Sure, I have a hundred feet of fresh water hose.” After attaching it they were able to partially fill their tanks. It seems the water tank is holding an air pocket of some kind and won’t fill properly. At least they got enough to get by for the trip. That’s one thing I like about most campers. They are willing to help out their neighbors when in need.