Along the Trail Campers Reveal Bandon

[alert-note]I got busy this week, not finishing my weekly post until today. Trying hard to publish my weekly post on time, I often end up having too much to do (mostly fun) and fail. As a result, I’m behind again! I often contemplate how did I ever have time to get everything done when I was working a full-time job? Retirement has been good to me in that respect and I’m happy I chose to travel full time in my fifth wheel with my faithful companion, Jagger. [/alert-note] 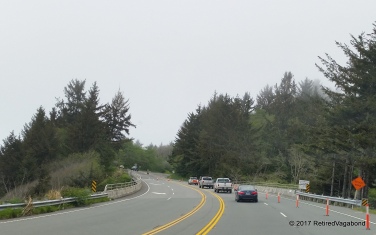 I first heard about Bandon yesterday when a couple staying at our campground told me about “Face Rock Creamery“. Any place with ice cream or dessert for that matter gets my attention right away. Stan and Joode own a home near Florence, Oregon. Years ago after retiring, they decided to rent their home and move to England where Joode is originally from. Now they travel back to check on their property and travel around camping and visiting their family and friends.

What a pleasant, friendly couple. Unfortunately, they only camped here one night. They were a wealth of information. In our short conversation, I brought up the fact I was concerned about the tunnel height on highway 101 just south of Heceta Head Lighthouse. Our GPS is showing eleven feet, six-inch clearance and the Coach is eleven feet, nine inches. We will be traveling there in a couple of days pulling the Coach. The detour is several hours of travel out of the way. They were positive that the GPS and Google information was wrong. Later this evening I got out my laptop and went on the Internet to Oregon DOT website to check what they had to say. I couldn’t find anything on the website about the tunnel height, so I reached out by email. The response was quick and stated that no low clearance in the state of Oregon would be a problem for our 11’9″ height. Great news. Thanks, Stan and Joode and safe travels.

Today Sydney and I decided to travel to Bandon. It’s a small town at the mouth of the Coquille River known for its Cranberry Bogs. It was first settled in 1873, a short seventy years after the Louisiana Purchase. Previously this area was inhabited by the Coquille Indians and it became notable when gold was discovered by the French Canadian Trappers in 1851 along Whiskey Creek Beach. Wikipedia has a short, very interesting article about this small town on the Oregon coast.

On arriving Sydney and I decided we should probably eat something with protein before having our dessert so we drove around the small seaside town and used Google for advice choosing a restaurant. After circling the block a few times we chose Minute Cafe. It was a small cafe near the harbor and main part of the tourist shopping area. Looking over the menu I decided on a Clam Chowder Bread Bowl and it turned out to be a good choice. I haven’t had a “Bread Bowl” in years and today was a little windy and cool. A perfect day for chowder. After our meal, we “walked it off” going to a few shops looking for souvenirs then back to the Workhorse and off to the creamy.

The facility was large and busy. While browsing the store you can see they plant processing cheeses through the large glass wall separating the store from the processing area. I never saw so many different types of cheese. Of course, it was all for sale along with other items. As we stood in a rather long line waiting for our turn to indulge. We noticed the serving size was huge. So when it became out turn we both chose to order a child’s cone, still almost as big as a normal three scoop cone. We finished off our ice cream on the second floor which had tables and a view of the ocean across the way. Then we headed back to camp, calling it a day here on the coast of Oregon.

Taking a break along the Oregon Coast 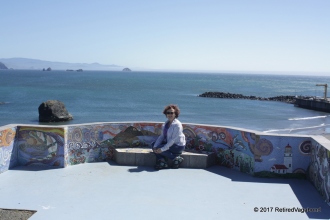 I would like to take this time to once again thank all of you supporting The Retired Vagabond website by using links on our website to make purchases at Amazon. While it costs you no extra money on your purchase we make a few cents on each purchase helping offset our publishing costs.