Oh my gosh, it’s freezing. I woke at 4 am and reached for another blanket. At 5 am I got up and fired up the Mr. Buddy Heater. On the way back to my bedroom, I glanced at the thermometer, I don’t know why as it told a fact I already knew, it was a cold 30° in the Coach. I slipped back into the covers and dosed again until 6 am. 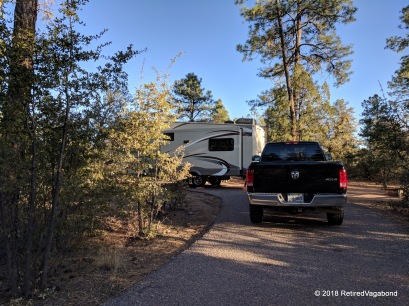 When Jagger and I arrived last night at Houston Mesa Campground it was pretty deserted. I wonder why? Just kidding, I know why. It’s wintertime and Payson, Arizona is at 4,900 feet elevation. It’s located below the Mogollon Rim ridge, which is 8,000 feet in elevation running South and East towards New Mexico. On the way up the grade from the Pheonix basin, where we have been camping the past few months, we passed a little snow along the road, but most has melted off since the last snow on Sunday. The campground had one little patch left, several campsites over from ours.

Bedroom slide repair at On the Road Again RV repair

Today we hitch up the Coach and travel a couple of miles to On the Road Again RV. There we’ll get our bedroom slide rebuilt. They ordered the parts needed, but they were on a backorder list at Lippert. When they received the parts from Lippert weeks later, I had already moved on to our Mesa camp for the first part of Winter.

My plan was waiting until I was ready to move again and travel back up the mountain to Payson, where they would complete the repair. Brian has spoken with the warranty company and it was agreed that would be the plan. Like often happens in real life, things don’t go as planned. One morning in mid-December I woke very early with unbelievable pain. I could hardly move. It turned out that I fractured my T8 vertebrae. The project was put on hold for another two months during my recovery. 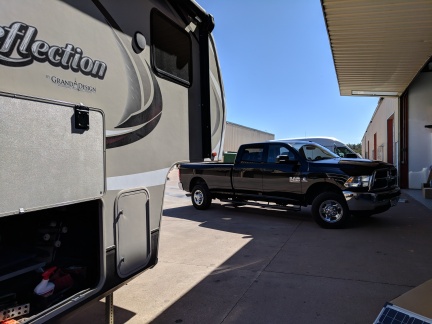 Workhorse waiting for its companion to be repaired

We arrived at 7:50 am for our appointment. It was before any of the businesses opened, so it was a little easier to back the Coach down the common way to the end where we parked. I hadn’t even shut down the Workhorse when Brian, the owner, pulled into the drive. He helped me nudge the Coach back a few feet and level up. I’m sure Brian and Jeremy were eager to finish the work they had begun months earlier and got right to work while Jagger and I left for breakfast.

I used Google reviews to find a nice Coffee Shop in town. It looks like “Beeline Cafe” will meet our expectations. Driving down the main highway in town I see it on the left. I pull the Workhorse to a stop and step down. Entering the older, well-kept building I’m greeted and told to pick a table wherever I wanted. I perused the menu, choosing a Denver omelet. I was starved. After placing my order I started to catch up on my blog and Facebook.

Just what I expect and very tasty. Since it would be several hours before our Coach was ready, I relaxed and caught up on some of my reading. An hour later Jagger and I headed to Walmart. Since I had emptied out the Coach several months ago when She was put in storage for the first time ever, I needed to buy all my Staples and some food to last until I get to my camp in California.

After attempting to buy out everything in Walmart, I gave up and left. Heading back to the Coach where they were in the process of finishing up. I had time to unload my Walmart purchase and put most of it away. My new refrigerator was started last night and was ready to go.

After finishing the slide Brian offered to inspect my roof and make any needed repairs so I didn’t have to climb up. No charge! What a great, and kind gesture, and as they say that’s not all. I had a bad plug on my portable solar panel. He fixed that too! The Coach is fixed and in great shape. I thank Brian and Jeremy, say goodbye and climb in the Workhorse.

[alert-announce]You probably haven’t heard about the Bedroom Slide Failure, the Refrigerator Failure and replacement and many other stories from last summer. I’m way behind on the trail, but in the future am planning on scribbling down my travels. I have made many good notes and taken lots of photos, but I have chosen to move on to keep my blog in as close to real-time as I possible. Please Sign up here to receive updates when the back stories are posted or you can follow us on WordPress. Backstories do not show on the front page, so as a “Trail Partner” you will receive an email just as soon as those “Backstories” are posted. Thanks again for following along![/alert-announce]

Jagger and l are off to our next destination, the desert in Ehrenberg, Arizona. There our friend Tennessee (John) is waiting for us. He has expressed that he’s itchin’ to see Jagger.