The Storm is Coming

The first part of this week…

…I spent taking care of some personal items.  It’s hard to believe tax time is just around the corner.

Yep, that killed most of one day.  I am glad I was organized as last year and this year are going to be unusual tax years for me due to my retirement and move to Montana.  I am going to back Southern California to have that unexpected pair of crowns finished in Huntington Beach.  During my visit I will be checking in with old friends, family and coworkers.  Also I will drop by my accountants’ office to deposit my documents for preparation.  I’m happy to get that out of the way so I don’t have any last minute stress, unless I owe more money 😦

On Tuesday I went on a road trip…

…to the north end of Lake Pleasant.  I saw a mention of an old airstrip on BLM land that was about thirty minutes away.

I was curious if the campsites mentioned might be a place of interest on a return visit to the Lake Pleasant area.  So off I went to explore the site and drive my Workhorse on it’s first official “off-road” adventure.  The dirt road was somewhat maintained, in fact there were road crews working on part of it as I drove by during my trip. For the most part I did not lose traction and only had some slipping of my tires on occasion.  A conventional vehicle would probably not have not problem as far as the BLM area at the Old Airstrip about seven miles in, as it was advertised.  The dirt road was relatively smooth.

The pictures here are of the 14 or so sites that are available and have been camped in at some point.  There are also some obvious signs that some have camped here with their horses.  Only two RV campers were parked here, off camera.  The ground was VERY rutted at the site.  I don’t believe I would want to bring my rig here, but doable for those that wouldn’t mind.  Several vehicles were parked here that had brought in their ATV’s by trailer and were off-roading somewhere in the dessert. 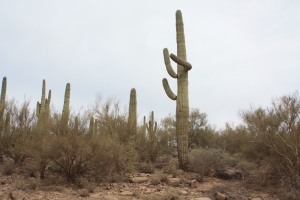 After parking I went on a short walk on a trail leading from the camp.  It was a beautiful, relatively cool day for a walk in the desert and I was interested in what I might find.

It wasn’t a good day for photos, due to the cloud cover.  Probably the coming storm.  It was the first time on my trip I have seen such an overcast sky.

After leaving the BLM campsite I put the workhorse in four wheel drive, for the fist time, as I went down the road a few more miles, the road deteriorated a bit more.

As the road got worse, I stopped for another walk to the top of a hill and snapped photo along the way. 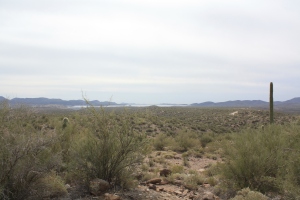 When I got to top of the hill there was a vast view of desert and Lake Pleasant from a distance.

I then walked back to my workhorse for a quick lunch and drove back to my camp at Lake Pleasant Marina.

On my last night here at…

…Lake Pleasant, I was able to capture this sunset.  Look closely on top of the

Saguaro cactus.  There was an owl perched, probably watching for early prey for dinner.

In all, my experience here at the lake was wonderful and restful.  Much needed after the move and the preparation starting my adventure here in Arizona.  I will definitely keep it in mind when I return to Arizona next year.

In the morning I will move on to Buckeye, AZ, a day early due to the coming wind and rain on Friday night and Saturday.

Until then, safe travels…